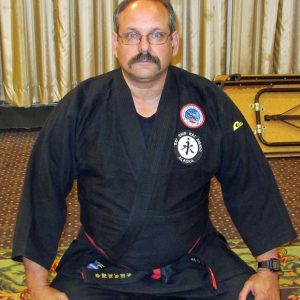 Michael A. Abels is the Head Instructor of Sei Shi Kai Aikido Alaska and Lecturer in Martial Arts at the University of Alaska Fairbanks.  He has been training in Aikido for more than 37 years and has taught Aikido at UAF for more than 74 continuous semesters. After the 2017 fall semester he now has instructed over 3000-students. He holds the rank of Shichidan (7th Dan) in Sei Shin Kai Aikido and a Nidan in Gosoku Ryu Karate under Soke Kubota/Hanshi Scott.  In addition he holds, a Nidan in Iai-Tate-Do (Yamasaki Sensei), Yondan in Iaido (Soke Kubota), and a Sandan in Hakakuryu JuJitsu (Brownridge). His teachers include Heck Sensei, Lemley Sensei and Hanshi Scott.  He holds the title of Professor at the International Karate Association – College of Martial Arts Fairbanks School where he teaches weekly Iaido and Aikido classes.  In addition to teaching he has authored a Japanese/English Aikido dictionary and a beginner’s handbook to Aikido.  Abels is field associate director compliance and external affairs for the Institute of Arctic Biology.  He is a Co-Principal Investigator on the Toolik Base Funding Cooperative Agreement between UAF and the National Science Foundation which provides three million dollars of annual support.   Abels was presented with the University of Alaska Merit Award (1989) and UAF Chancellor’s Medal Outstanding Leadership Medal (1977). He is listed in Who’s Who in American Education, Who’s Who in America and Who’s Who in the World. He was inducted into the Martial Arts World Magazine Hall of Fame (2010) and recognized for leadership in education. He was inducted into the United States Martial Arts Hall of Fame (2011) and recognized as Aikido Master, 2012 recognized as Distinguished Instructor and 2013 Silver Life Award. He was inducted into the Masters Hall of Fame in 2016. Abels earned a B.Sc. Degree Natural Resource Management, University of Alaska Fairbanks and completed national level rifle coach certification, United Stated Olympic Training Center. He was on the Gold Medal sporting rifle team, Team Alaska, Arctic Winter Games Yellowknife NWT, (1984).

Leave a reply Click here to cancel the reply