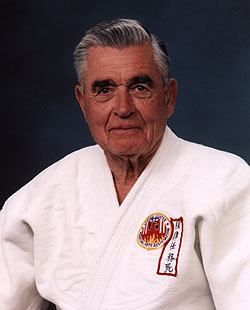 It is safe to say that there is no other person alive in the world today who has had so varied and comprehensive a career of achievement in Judo and the Martial Arts as Philip S. Porter. In every field of endeavor involved in Judo; from coaching, teaching and national and international leadership positions to writing, refereeing and building the theoretical framework of Judo, he has excelled. His competitive career spanned 50 years, culminating with four US National Masters Gold medals in winning which he never lost a match.

O-Sensei (Teacher of teachers) Philip S. Porter began his Martial Arts career as a boxer 65 years ago– in 1943 at age 18. He was later a member of the West Point Boxing Team; and in 1950, Light Heavyweight Boxing Champion of the Western Area of the Air Training Command, USAF. Porter graduated from the United States Military Academy at West Point in 1948, and served in the U.S. Army and Air Force for 25 years, retiring as a major in 1967.

O-Sensei started Judo, JuJitsu, and Karate training in 1951 while serving on a Strategic Air Command (SAC) combat crew at Travis Air Force Base, California. His first teacher was Sensei Walter Todd, 2nd Degree in Judo and the first American to be awarded a black belt in Shotokan Karate. Todd was later promoted to 8th Degree Black Belt in Shudokan Karate, and is now deceased. Because Porter was 27 years old at the time, he soon started teaching and coaching Judo as well as competing. Now, he is called O-Sensei because he is responsible for teaching and watching over the rank promotions of thousands of his Black Belt students and club leaders throughout the country in over 1,500 clubs of the United States Martial Arts Association.

O-Sensei’s Judo Competition History. O-Sensei Porter started competing in Judo in 1951, and is still active in masters competition, a competitive career spanning over 50 years. He was US Air Force USAFE champion in 1957, won a Bronze Medal in the US Senior Nationals in 1963, won the US National Masters Championship four times (1975,1977, 1980 and 1981), and won two gold and a silver medal in the 1998 World Masterathlete Games in Ottawa, Canada in 1998. 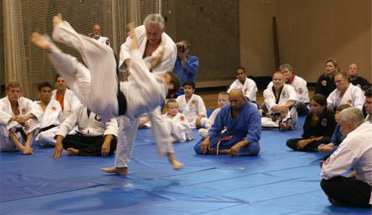 Phil Porter’s coaching achievements are legendary. He has produced over 1,000 national and international medalists in Judo over the past 50 years, 500 of them during the eight years he coached the National Judo Team at the NJI (1984-1992). No other coach in America has even approached this record. His team won six medals with six athletes in the 1991 Pan American Games, including Kate Donahoo’s Gold Medal. Kate Donahoo also won 5th place in the World Judo Games of 1989, 5th place in the 1992 Olympics, and won the Bronze Medal in the 1988 World Good Will Games.

Porter’s Creative Work In Judo. Coach Porter considers that his most important contribution to Judo and the Martial Arts is the large number of books, magazine articles, videos and DVDs that he has created. Many of these works outline and explain his own original theoretical contributions to Judo. His videos alone have sold over 130,000 copies, the most important and popular Judo videos in English ever made in the world. Among his video masterworks are the world standard for Judo, “The 65 Throws of Kodokan Judo” (Now available for the first time on DVDs); as well as, “The Secrets Of Winning In Judo,” “The Counters of Judo,” and “Judo Grappling Techniques,” all of which will soon be available on DVDs.

In addition, an incredible ten DVD series titled “My Life In Budo” is now in preparation by a professional cinematographer, and O-Sensei himself is also shooting, writing and directing the creation of a special DVD series on the bent arm lock, ude garami.

His well-known books include “Judo From The Beginning,” “Championship Judo Drill Training,” (with Ben Campbell), “The Basic JuJitsu Manual,” and the Junior and Senior Rank System Manuals for American Judo, which have been printed in hundreds of thousands of copies over the past 40 years. He also created and was the editor of the magazine “American Judo” for 35 years.

O-Sensei believes that at age 83, his theoretical, teaching and coaching work in Judo is just beginning. He says, “My creative ability in Judo seems to increase over the years. I am developing more new concepts, teaching methods, and technical applications of Judo now than ever before. The next 30 years promise to be a very rich experience!”

National And International Leadership. O-Sensei Porter is called “The Father of American Judo” because he helped found the USJA in 1954, and personally built it into the largest Judo group in America, as well as the largest non-profit Martial Arts organization in the country, over a period of 41 years. Below are listed a few of O-Sensei Porter’s leadership achievements in American and world Martial Arts.

Porter founded and became President of the U.S. Martial Arts Association in late 1995. The USMA is the only non-profit American organization devoted to unifying the Martial Arts in our country, and recognizing all Martial Arts.

O-Sensei’s Teachers. Porter says, “I was blessed with the greatest teachers a man could ever have.” While in the Air Force, his first teacher was Walter Todd (later 8th Dan). In 1953, Sumiyuki Kotani (later 10th Dan) and Tadao Otaki (later 9th Dan) both accepted him as their student. Then O-Sensei trained in England at the famous Budokwai in London for a period of four years (1954 to 1958). At that time his teacher was Trevor P. Leggett, until his death the only 9th Degree in Judo in Europe, and one of only a few 9th Degrees in Judo outside of Japan. O-Sensei insists that his teachers are still with him, and that now his O-Sensei is the Lord Christ.

Refereeing History. Porter was active as a national and international referee in Judo for many years. He rewrote the IJF contest rules in 1967. He refereed the finals in the 1965 World Judo Championships in Brazil between Geesink and Matsunaga. He served on the six-member Consultative Committee of Referees for the first Judo Olympics in Tokyo in 1964, and was the referee for the team finals in the World CISM Games of 1971 in Vienna, Austria.

O-Sensei’s Martial Arts Rank History. O-Sensei holds the 10th Dan or higher rank in more than 15 Martial Arts. Many of these ranks are honorary and are not listed below. The six arts in which O-Sensei holds 10th Dan and which he considers earned ranks are included in the rank history below, arranged alphabetically.

In 2000, O-Sensei created the USMA International Hall of Fame and the USMA National Junior and Senior Training Camps. O-Sensei Porter has been granted several honorary Doctor’s degrees, and has written many books on Judo and JuJitsu. O-Sensei travels extensively, conducting over 100 seminars a year.

Our founder, Philip S.Porter, passed away on August 7th, 2011 of cancer. O-Sensei Porter is considered by many “The Father of American Judo”. O-Sensei founded the USMA, helped found the USJA, served as a Chairman of the AAU Judo Committee, Chairman of the U.S. Olympic Judo Committee, Secretary General of the Pan American Judo Union, and produced more than 1,000 national and international medalists in Judo over the past 50 years, 500 of them during the eight years he coached the National Judo Team.

Phil Porter graduated from the United States Military Academy at West Point in 1948, and served in the U.S. Army and Air Force for 25 years, retiring as a Major in 1967.

Phil will be greatly missed by his family and friends, and his legacy to the American Martial Arts will never disappear.